MFAW-VT alumni Joe Ricker just got a 5-Book deal with Down & Out Books.  Below is their press release.

“I read several of Joe’s stories and was taken in by the depth of character and plot,” said Eric Campbell, publisher of Down & Out Books. “It will be a real pleasure to introduce him to a new audience of readers.””I’d been trying to find a place that would embrace the edginess in my style of writing,” added Ricker. “When Eric offered to reissue WALKIN’ AFTER MIDNIGHT, together with five new stories included in the collection, in addition to four of my novels, I was almost overwhelmed. So many publishers had passed on my work, but I think Down & Out Books will be a great home for me. I look forward to working with him and his team in bringing these books out.”

Ricker’s short story collection WALKIN’ AFTER MIDNIGHT, initially released in 2015, will be reissued by Down & Out Books in May 2019. New York Times bestselling author Ace Atkins said of it, “These shorts are served straight up with no chaser. Highly recommended.” New York Times bestselling author Tom Franklin added, “Tough yet lyrical, bristling with hard-won wisdom,

these stories knock you out of any comfort zone you may have found and into the red.” And international bestselling author Gerry Boyle said, “His characters are dark, desperate, and fascinatingly vivid. Read Ricker and have your eyes opened.”

SOME AWFUL CUNNING, the first of his new titles, will come out in early 2020, followed by PORCELAIN MOTHS, ALL THE GOOD IN EVIL, and STILL MONSTERS.

About the author: Joe Ricker is a former bartender for southern literary legends Barry Hannah and Larry Brown. He has also worked as a cab driver, an innkeeper, acquisitions specialist, professor and in the Maine timber industry. Esquire magazine referred to him as “[a] man of letters who’s gentle in the way that only the toughest of hard-asses can be.” He grew up in Sanford, Maine, and earned degrees from Marion Military Institute, Ole Miss, and Goddard College. Ricker now lives in Reno, Nevada, where he teaches in the University of Nevada’s English department.

In its eighth year as an independent publisher of award-winning literary and crime fiction, Down & Out Books (https://downandoutbooks.com) is based in Tampa, Florida. For more information or to inquire about an interview with the author, contact info@downandoutbooks.com. 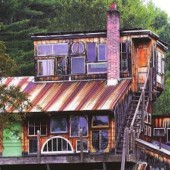 If The Launch Pad Is Aligned

Political Incorrectness: History in the Family